When it comes to the economic fallout of the Coronavirus, the Dutch economy is not as robust as you might think and is at a high risk of a sustained slump.

These last few years, the Dutch Finance ministry has built a reputation of being extremely conservative when it comes to spending. So, conservative, that it cut government spending just after the recession of 2008, prolonging their economic slump. However, with the Covid-19 epidemic having reached Dutch shores, the Dutch have announced sweeping government spending plans to cushion the blow. Is this economic crisis different than the last and can the Dutch economy withstand it? Or is it more vulnerable than we think?

What is also unique about the Covid-19 virus shock is that it hits economic supply and demand simultaneously. What do I mean by that? On the one hand, it means that the supply of goods and services will decrease. For example, think about all of those cancelled parties, events, and flights. On the other hand, it means that the demand for goods and services will also decrease. Think about all those people isolating themselves, no longer visiting restaurants, and no longer wanting to travel, even if they could.

The Dutch economy will certainly take a big hit. But how much? Nobody knows for sure. But prominent economists, estimate that for virus hit countries, like the Netherlands, economic output could shrink by 7-10 percent this year. These are optimistic forecasts. They assume that the economy will fully recover after being in lockdown for a couple of months. This is only possible if firms and banks will survive the crisis. If enough of them go belly up, it might take a long time for the economy to recover.

Now, this is the general case. But what about the Dutch case? How vulnerable is the Dutch economy?

How vulnerable is the Dutch economy?

Every economy is unique. That means that each of them has characteristics that represent strengths and weaknesses during a pandemic induced economic crisis. Let’s first consider some of the strengths of the Dutch economy.

The first strength is a consequence of the Dutch attitude towards government debt that I mentioned earlier. Current government debt, in relation to the size of the economy is about 52%. This is well below the 60% guideline of the European commission and is considerably lower than a country like Italy who has a government debt of 134%. 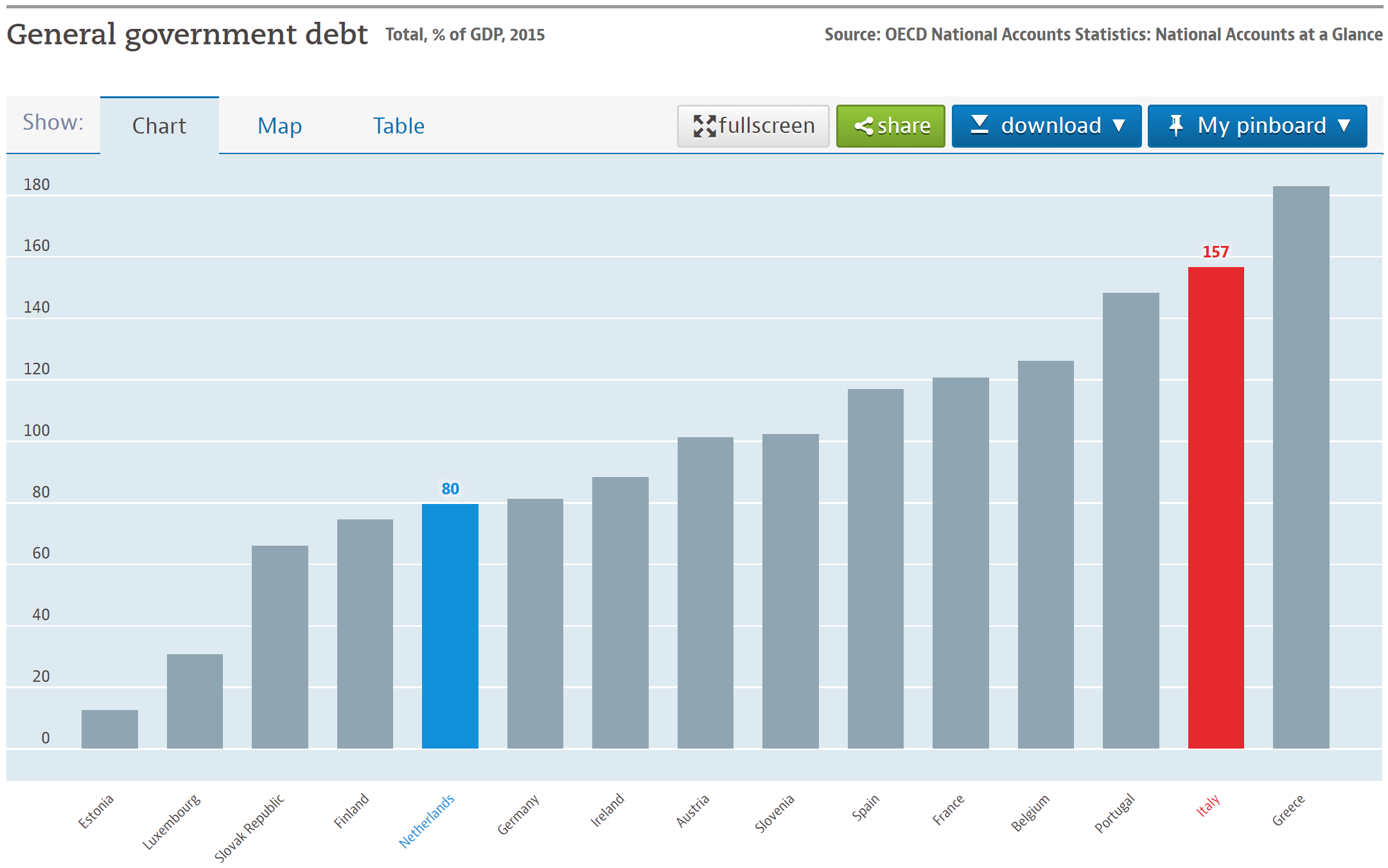 While there are now many economists that do not consider higher government debt levels a problem per se, the government debt level is very important in the context of the Eurozone. The reason is that these countries do not have the complete and full backing of their own central bank. Rather, they have to rely on the European central bank. As a consequence, private investors are not always willing to lend to European governments at the same interest rate. If you have not done so already, check out my previous blog on this very topic.

That being said, for the Dutch economy, its low government debt levels are a strength. It means that interest rates are relatively low and there is lots of room for increased government spending.

Another advantage of the Dutch economy is its competitiveness. In fact, the World Economic Forum ranked it the 4th most competitive economy on earth in its 2019 ranking. It went into the current crisis with record low unemployment and relatively low income inequality (meaning people have some buffers) and a well educated population (making it easier to work from home). Furthermore, it has an extremely productive local farming community, making food shortages as a consequence of border closures very unlikely.

But that is not all, yes the economy is highly competitive, but it also has relatively generous safety nets for those who will be hit by this crisis. In the Netherlands, everyone has basic health insurance because it is required by law. Furthermore, employees have some protection against being fired without good cause. And finally, there are fairly generous unemployment benefits.

Based on all of that, you might think that the Dutch economy is one of the most well prepared to deal with the economic fallout of this virus. But, there are some significant vulnerabilities that not many people know about.

First of these is that Dutch debt is actually very high! Remember that statistic of government debt being only at around 52% of economic output. Well, the Dutch economy has more actors than just the government.

If, we consider the total debt of the Dutch economy we get a completely different percentage. Total debt to economic output was a whopping 325% in the second quarter of 2019. At that time government debt was still 59%, company debt was 165% and household debt was 101%. 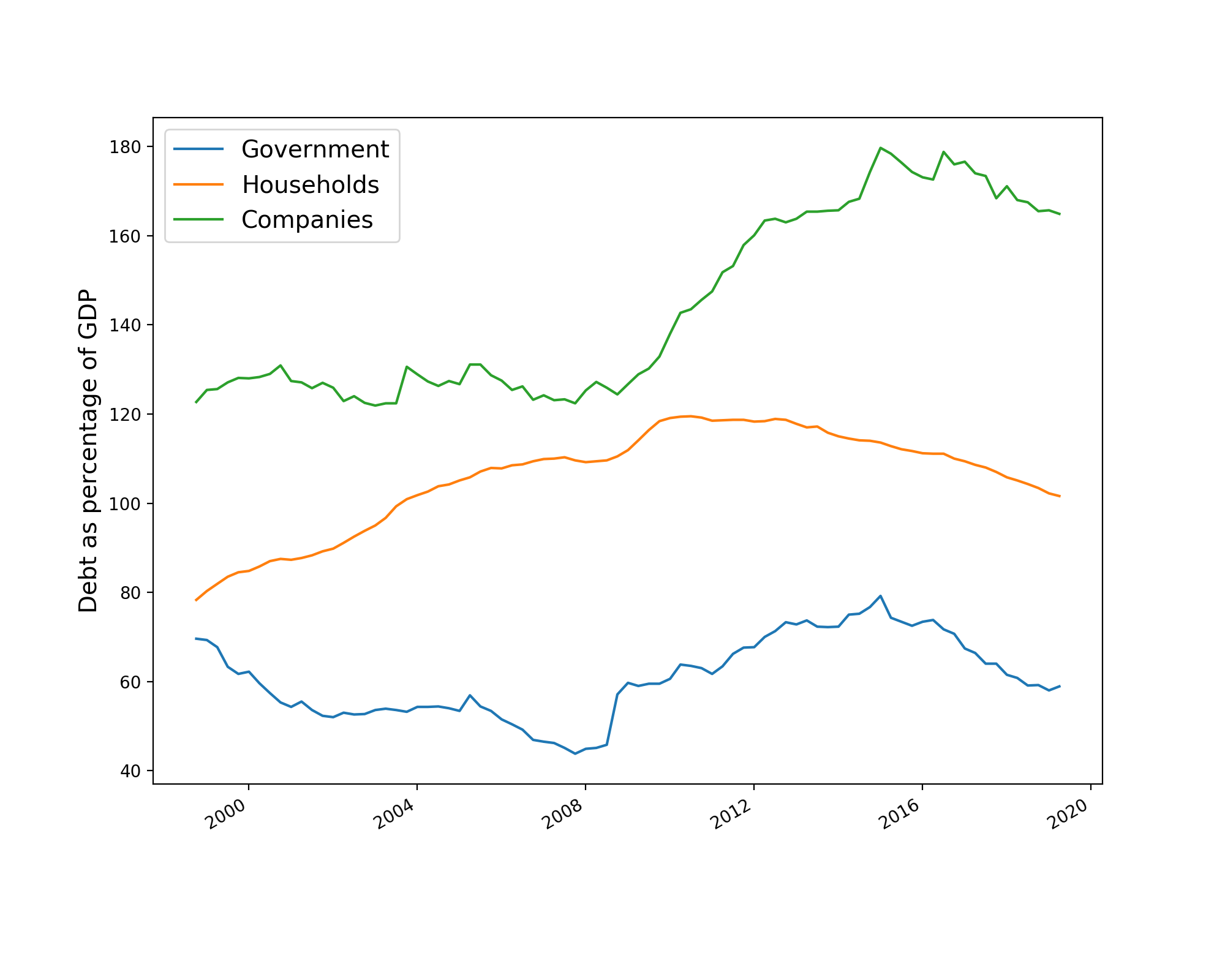 To put that big total debt number into perspective, the Dutch love to lecture the Italians on borrowing too much, but total debt to economic output in Italy is only 257%. And that of Greece stands at 295%. Yes, these countries are vulnerable because of high government debt. But, their company and household debt levels are much lower. The Netherlands is vulnerable because of its high private debt levels.

With many border being closed, even within in the European union, and global demand falling everywhere. This means that the Dutch economy is exposed. It could also be exposed for a longer period of time because not only does it need to take into account its own response to the virus. It will also be affected by the actions of other governments. What is more, the virus in China already cost the Dutch export sector in the first quarter of the year. Now it is hurt by a drop in European demand. And if the virus hits other continents after Europe, than the Dutch will still feel this lack of foreign demand long after the virus has left the Netherlands.

But sadly, that is not all when it comes to the exposure of the Dutch economy to outside forces. The Dutch are well known to be massive savers. A lot of those savings are in their giant pension funds. These funds are so large that they could not just invest everything in the Netherlands. Dutch pension funds have invested much of their money abroad.

With stock and bond markets nosediving all over the globe, the Dutch pensions fund sector is in trouble. So much so, that it probably needs to either cut pension payments for the elderly or ask for higher contributions for the young. Both will impact the economy.

So, while the Dutch economy might seem fairly robust at first sight. If you dig a little deeper, you find that it is more exposed than expected. That is… unless the government cushions the blow. But will the frugal Dutch do that? Or will they keep their hands to tight on the purse?

What is the reaction of the government?

Over the past years, the Dutch finance minister Wopke Hoekstra has built a reputation as the leader of the northern European fiscal hawks. This group includes countries like Ireland, Denmark, and the Baltic states and they were until recently arguing for less government spending and less risk sharing between European governments.

The Dutch even went so far as to cut government spending significantly just after the Great Recession of 2008. This is seen as one of the reasons why the Dutch economy was very slow to recover from that crisis compared to its neighbours such as Belgium.

Therefore, it surprised some when the Dutch cabinet announced that they were willing to increase government spending by at least 8% of GDP to cushion the economic blow of the virus. This was however, not a very controversial move because this is truly an external economic shock. Saving banks was more difficult for Dutch politicians to explain to their constituents because these banks helped cause the previous crisis to be begin with. This is seen as protecting companies who are not responsible for the crisis.

That being said, what where are the measures the Dutch government is taking?

Finance minister Hoekstra announced that those companies which had less work for their employees would get government support if they did not fire them. Furthermore, those companies in hard hit sectors such as entertainment and catering, could qualify for a both a government subsidy and a credit guarantee by the government. Also, those who are self employed can get a monthly grant up to the level of unemployment benefits, as long as they can show that they lost their income as a consequence of this crisis.

Note that most of these measures are aimed at businesses rather than individuals. This might seem unfair at first since, in the US they are considering supporting households with cash. But when viewing this response, it must be taken into account that in the Netherlands there are already strong protective measures in place to protect individuals. Also, everyone already has health insurance.

These measures will not be enough to avert a recession. That much is certain. But the aim of them is to cushion the blow so that companies and banks will survive and the economy can get back to its previous glory after the virus has been tamed.

So where does that leave us. Sadly, as economist, we cannot accurately predict the economic consequences of a pandemic because it has never happened before (sure it happened a very long time ago, but the structure of the global economy was very different then). We can confidently say that it will be bad. We can also say that the Dutch economy is not as robust as you might think and that it is at high risk of a sustained slump thanks to its dependence on foreign demand, high debt levels, and exposed pension sector. But for now, it seems that the Dutch government has taken adequate measures. They should however be prepared to do more. The good news is that they have the fiscal room to do so. Also, it might be in their interest not to be too hard on other European countries since these are their biggest export markets. The biggest threat to the Dutch economy is the risk that the government will want to get back to cutting budgets too soon. Leaving the economy slow to recover, just like the last time.

If this topic has peaked your interest and you would like to know more about it. I’ve suggested some of my favourite books below:

Note that moneymacro.rocks is a participant in the Amazon Services LLC Associates Program, an affiliate advertising program designed to provide a means to earn fees when linking to Amazon.com and affiliated sites