In 2011, the Eurozone was almost broken up in a period of time that came to be known as the Euro crisis. Now, with Europe being at the centre of a new major Covid19 outbreak, economists and investors are wondering whether it will trigger a new Euro crisis. Will the Eurozone crumble and will the Euro currency disappear when the smoke clears?

To understand why the Eurozone is at risk, we need to go back to 2012. Back then, Corona was just a Mexican beer, Greece got a massive 130 billion Euro bail-out, and David Cameron (then UK prime minister) made a speech stating “The Eurozone is at a cross-roads. It either has to make-up or it is looking at a potential break-up.”

The Euro crisis usually refers to the period between 2009 and 2012, when Eurozone countries such as Portugal, Ireland, Spain, Cyprus and Greece were unable to repay or refinance their government debt on their own. They needed the support of the dreaded ‘troika’ (consisting of the European commission finance ministers, European Central bank, and IMF) to do so.

This was just after the Great Recession of 2008, after which many states had to safe their banks. What made Eurozone countries unique is that they did not have their own central bank and currency to support them in doing so. Having its own central bank means that a government can never run out of money because the central bank always print some more.

Sure, doing this too much and structurally will cause inflation. But, at least in a crisis, in which only temporary cash is needed, the central bank can help. For Eurozone countries, this was not an option. They had to borrow extra Euros from private investors. But no investor is big enough to lend so much to a country that they can turn the economy around. It will need to trust that other investors will invest at the same time. So, individual investors take a huge risk in doing so and, logically, for countries that were in trouble, interest rates went up astronomically, making new borrowing unaffordable. As can be seen below, interest rates of different countries all converged when the Euro was introduced but then rapidly diverged during the Euro crisis. 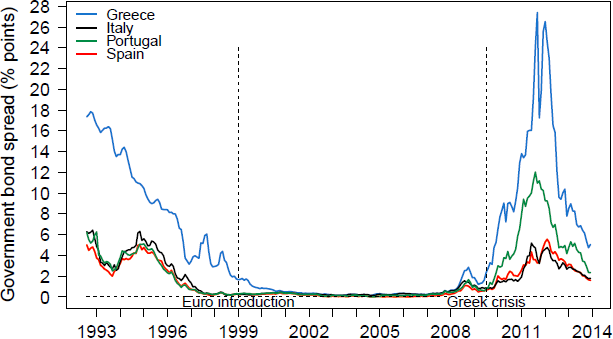 Countries with rapidly increasing rates had to choose, cut back spending to be able to pay these excessive interest rates or get of the Euro and go back to their own currency. Having their own currency, they could repay the debt. Sure, this new currency would drop massively in value, and it would still be in huge trouble. But, at least it has immediate excess to emergency funding in a crisis.

In 2011, Greece was not so lucky. Its government was in deep trouble, after having gone on an unproductive borrowing spree on the back of a massive real estate boom, real estate crashed and so did its economy. It tried to borrow emergency funds from investors. But no-one would lend to them an affordable interest rate.

It had a choice. The first choice was to default on its debt and plunge the country in a massive recession. I emphasize massive because it’s easy to underestimate the human cost of such a move. This means no salaries for government employees. No pensions for ex government employees. That is a massive hit to the economy. The second choice was to borrow from other Eurozone countries, but they demanded that Greece would cut back on exactly these essential expenditures. The choice was basically between killing yourself by hanging or by poison. Not great.

Therefore, after that, European economists have been urging the Eurozone member to build institutions that can provide emergency funding based on conditions that hopefully do not wreck the economy. Also, they have been pushing for a banking union, so that individual states did not have to rescue their own banks.

The idea was to fix all of this, now that the economy was doing better and emergency funding was not necessary. Always better to fix the roof when the sun is shining. That was the idea at least. The problem is that… Eurozone politicians did not complete all of these reforms and now…. It seems a storm has come for the Eurozone. And that storm is known as Covid-19.

So now, we wonder what might the impact be of Covid-19 on the Eurozone economy?

How does Covid-19 affect the Eurozone economy?

The impact of the Covid19 virus on any economy can most simply be described as follows. When people are all quarantined at home, they cannot buy stuff and they cannot make stuff. In economic jargon that would approximately translate to: the covid19 virus represents a demand shock (people buy less stuff) and a supply shock (people make less stuff).

Now, if you realise that we usually measure our economy in terms of the value of transactions, it is clear to see that people buying and making less stuff will reduce the total value of all transactions. In other words, the result of Covid19 will be a weaker economy. Even in the best case scenario, the economy will take a hit.

But, the good news is that this could be temporary. It could be that after people have been sitting at home for two months, they just go back to work and just go back to buying. Since people work less, they earn less. But since they buy less, they also need less income. That is the best case scenario. In this scenario, the Eurozone economy just bounces back to its previous level after Covid19.

Sadly, there are two major complications. The first is that not all expenses stop if people stay home. For many people and companies, the rent will still be due at the end of the first quarantine month. Similarly, for indebted companies and people, they still need to repay part of that loan every month, with interest. Now, this could be fine if people and companies have buffers. The second complication is that actually, many don’t. This means that many companies and individuals might go bankrupt. If they do, they will not be able to pay their debts. And if that happens, what do you think will happen to the banks? They will go broke. And remember, that was what started the original Eurozone crisis.

Could covid19 trigger a Eurozone crisis?

How will Eurozone governments will be affected by those companies, citizens and banks that did not have the necessary buffers to survive the supply and demand shocks that the virus produced?

They will be affected in two ways. The first is that they will receive less taxes. Not only from these broke businesses, banks and citizens but also from all those taxpayers that were selling to them. The second effect is that the government will have to spend much more on unemployment and other benefits. So, its debt will rise massively.

That is a big problem. Remember that the Eurozone structure does not have the right institutions in place to provide enough emergency funding and that national governments are still responsible for saving their own banks. And sure enough, the interest rates of Italy, both the most exposed to the virus and most indebted Eurozone government, has already spiked. So, yes, for sure the Covid19 economic fallout could trigger the next Eurozone crisis. But, whether it will, depends on the response of European policy makers.

Which policy makers are we talking about? When a big crisis like this hits, people have come to rely primarily on the European Central Bank. Not because it is best positioned help but rather because, in the previous Eurozone crisis it has the most resolve to act decisively. The current president of European Central Bank is Christine Lagarde. While her statement that the ECB is not here to lower the interest rates of individual countries compared to other led to initial panic among investors, she later clarified that the ECB is fully committed to avoid any fragmentation in a difficult moment for the euro area.

One of the measures that the ECB has implemented immediate is €120bn of extra bond purchases. Furthermore, it launched a new programme of cheap loans to encourage banks to keep lending to small businesses. Finally, it made the rates on its existing bank lending scheme negative. This means that it will pay banks that lend from it.

You might notice that all of these measures are intended to provide buffers for banks. Both in the hope that they will do the same for firms and that they do not fall and drag down their governments with them.

That being said, both the ECB and most economists have said that to truly safe the Eurozone, governments need to spend more. This shifts the spotlight to the second group of policy makers: the politicians of Eurozone member states.

To calm initial panic on financial markets, Italian and Spanish market regulators banned investors from betting against the prices of stocks. Doing this they hope to calm the nerves of investors and keep the money flowing. Furthermore, they pushed for more government spending to turn the economic tide. In the past this has been problematic, especially since ministers of primarily Northern countries like Germany and the Netherlands, seem to hate increasing government debt, whatever the circumstances.

This made it so surprising that the German finance minister came out declaring that he brought an economic Bazooka (or Panzershreck) to counter the effects of the Corona virus. The state investment bank will provide an almost endless supply of loans to struggling companies. Furthermore, companies will be allowed to postpone paying billions in taxes. In addition, the Germans rushed through a bill that supports companies that put their workers on reduced hours. These unexpected moves from Germany might motivate other Eurozone politicians to do the same.

The different response from politicians now when compared to the previous Euro zone crisis is remarkable! But, will it be enough to prevent another crisis?

Sadly, no one knows for sure. The Eurozone has never been hit by an economic shock of this size. The massive quarantine efforts to combat Covid19 will hit the Eurozone economy hard. A lack of buffers and quite a lot of debt means that Eurozone companies and banks will be under a lot of stress. This will inevitably affect government budgets. However, the difference with last time is that politicians now show a willingness to save the Euro.

For now, I remain hopeful that the Eurozone will be able to whether the economic fallout. That being said, there are few certainties in economics. So, it is important to keep up to date. You can do so by following this blog, where I will post regular content on economics, central banking, and finance.

Also, please consider sharing this blog using the buttons below or dropping a comment. I am keen to discuss with you further about how the Eurozone will be affected by Covid-19.

If this topic has peaked your interest and you would like to know more about it. I’ve suggested some of my favourite books below:

Note that moneymacro.rocks is a participant in the Amazon Services LLC Associates Program, an affiliate advertising program designed to provide a means to earn fees when linking to Amazon.com and affiliated sites