In this post I will not only refute the simplistic view that quantitative easing is money printing, I’ll tell you exactly how QE is different from money printing.

Money printing, the most taboo subject in economics. But, if we are to believe much of the media. This is what has been the new normal. After all, it has been going on for the past few years now in America, Europa and Japan. The central bankers just changed the name to Quantitative Easing (or QE for short).

No wonder so many analysists / hacks are predicting the demise of the dollar, the return of hyperinflation, and basically the end of the world. Even though, central banks have been doing this for years now and we really haven’t seen a lot of inflation.

What is quantitative easing?

Okay, to be able to pinpoint exactly how quantitative easing and money printing are different, we’ll need to discuss, exactly, what Quantitative Easing is.

QE basically refers to a policy where the central bank starts buying financial assets on a large scale from the private sector. These assets are typically government bonds, and sometimes bonds from big corporations that are very unlikely to go out of business.

But, in this balance sheet example, you can see that, what differentiates QE from a normal transaction is that large scale asset purchases by the central bank are financed by newly created money. 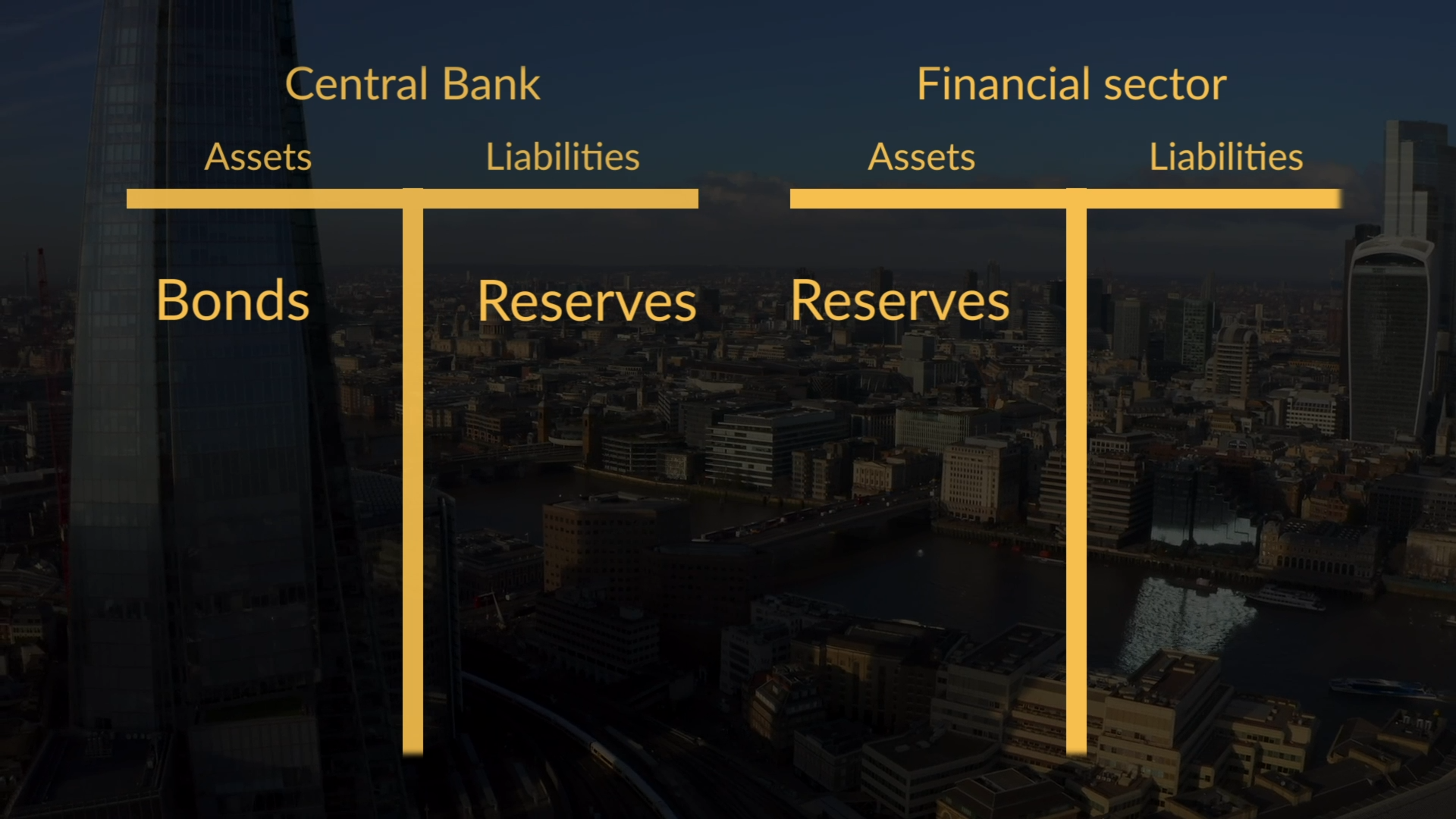 Balance sheet example: the central bank has expanded its balance sheet to buy bonds from the private sector with newly created reserves

In this case central bank reserves, where reserves are basically digital accounts that private banks have at the central bank and can use to pay each other.

The first difference between QE and money printing

And this is again important because where money ends up first, is likely where you will see the biggest impact on prices.

This explains why we have seen massively increased asset prices in countries where there has been QE, but not so much inflation.

But, this is not the whole story of QE. While the central bank creates reserves. It also takes something out of the economy, namely bonds. This is important because bonds are actually used as money in large parts of the financial sector.

The second difference between QE and money printing

And this brings us to the second key difference. With money printing, the government spends more money into the economy. But, with QE this doesn’t have to be the case. If the government doesn’t simultaneously increase its spending, the central bank merely inserts one money like instrument while taking out another.

If you visualise the monetary system, it consists of a monetary core of central bank money. First, notes and coins, and on top of that bank reserves. Then, there is a layer of money created by private banks. And then, finally, there is a layer that consists of financial instruments often used as money, but only used in some parts of the economy. I call this layer the financial crust. 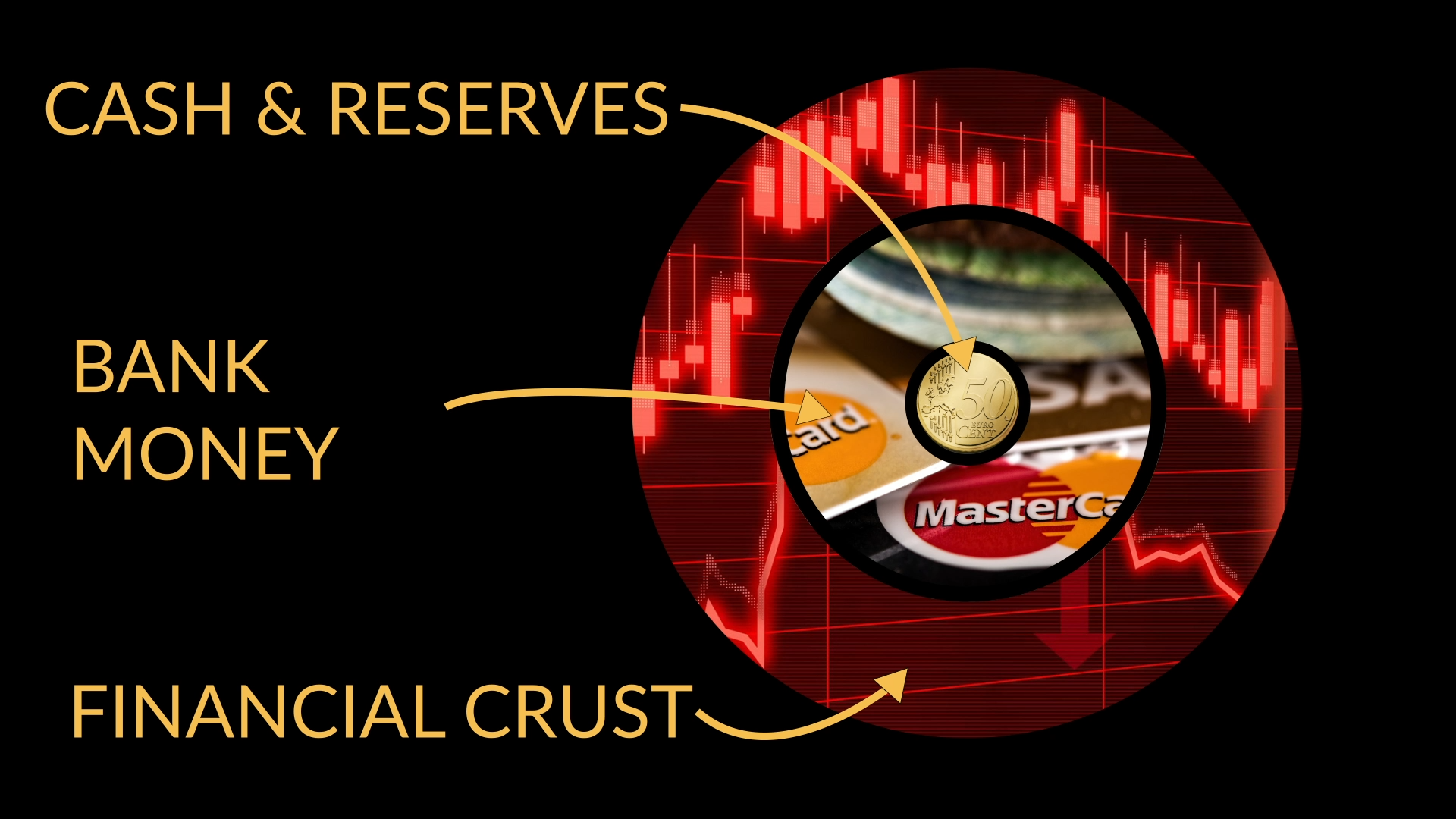 So, when QE happens, reserves are added to the economy while, at the same time bonds in the financial crusts are taken out of the economy. But, the effective money supply remains the same.

This begs the question, if the effective money supply is not changed, then why bother with Quantitative Easing at all?

Well, first, it is important to realise that reserves are more liquid than bonds and can be directly exchanged for cash with the central bank.

So when there’s crisis, reserves are super safe while government bonds cannot always be relied upon for payment.

So, perhaps a more relevant comparison for the media, instead of calling it money printing, is calling QE long term interest rate monetary policy. But, this is of course not a very catchy name. So, I doubt they will ever do it.

Also, there is a third effect that central banks are … banking on… and that is that by increasing the quantity of available reserves, private banks can more easily expand their lending and therefore the quantity of private bank money. This however, is not guaranteed to happen since bank lending also depends on people being willing to borrow, but, more on that in my video on bank money creation, linked in the top right corner of the screen.

And, finally, by performing QE, central bankers have made government borrowing cheaper by lowering interest rates. This enables governments to spend more. Although, governments don’t always use this opportunity. If the central bank and government work in tandem, then QE becomes more like money printing because money is added to the economy and nothing was extracted from it.

Okay, so that was a crash course on quantitative easing.

It’s about buying assets with newly created reserves which makes the system more safe. And since it is more safe, this could in theory make banks more confident to increase their lending. At the same time, because it takes bonds out of the economy, QE will lower long term interest rates. Finally, by making interest rates lower, it could encourage governments to spend more.

So, there are two main reasons why QE is not money printing.

I hope this has cleared things up about quantitative easing. But, if it hasn’t. Please say so in the comments. I will try to answer any questions.