Ever since I was born, there has really only been one question on my mind. How does the monetary financial system work? To find out, I took all economics classes I could in high school, did a bachelor in economics, and master in finance. It was only during my PhD studies that I came across a framework that finally helped me make sense of the monetary system of any country.

That framework is called the Hierarchy of Money, and, in this post, I will share a visualisation of it with you.

The main point of the hierarchy of money is that some forms of money are better than others. There is thus, a hierarchy.

When the economy is doing well, this hierarchy can be difficult to see. However, when there is a crisis, it will become immediately obvious that your hedge fund investments are better sold in exchange for money in the bank. And when the going really gets tough, you might even be better off to run to your local bank and withdraw all of your money to walk home with a bag of cold hard cash.

I like to visualise the hierarchy of money as a circle where there is a monetary core of central bank money, a large monetary periphery of private bank money, and an even larger financial crust that contains all other financial instruments. 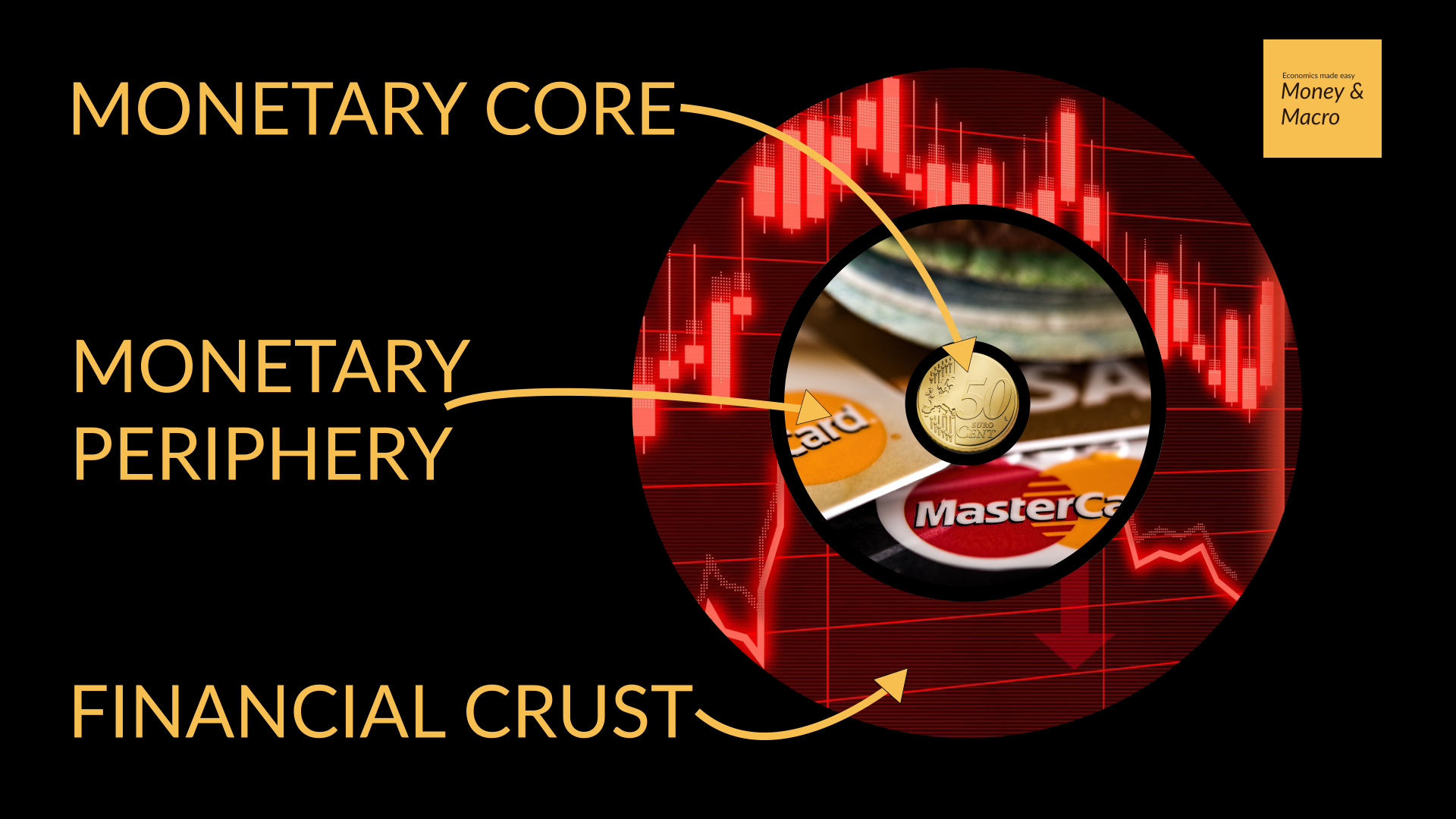 And that is the monetary system of your country in a nut-shell. Now, let’s dive into each layer and discuss its characteristics and relation to the other layers.

The first layer is the monetary core and in all modern economies, this money is issued by the central bank. Some of this can be used by the public. For example, bank notes, coins, and perhaps in the future a central bank digital currency. But, there is also a substantial part of this money, namely central bank reserves, which can typically only be used by banks.

Now, importantly, the size of the monetary core is not fixed! It fluctuates. In fact, it fluctuates on a daily basis. The core increases in size whenever banks borrow reserves or cash from the central bank and shrinks if banks reduce their central bank borrowing. This is why I chose to visualise the hierarchy of money as a circle, because now I can show you this crucial point, and that is that the monetary system is not static. The money supply fluctuates daily!

Now, this framework has been so helpful to me because it helps me structure some of the most important discussions in monetary economics.

For example, when I discussed actual physical money printing in my previous post, I was talking about expanding the size of notes and coins. So, this was a discussion about the monetary core.

But perhaps you are interested in quantitative easing? Using the hierarchy of money framework, we can easily see that it is similar, but not quite the same as money printing because Quantitative easing is about increasing the size of reserves rather than the number of notes and coins.

Or are you one of those economists who likes to think that gold is the only true form of money? Well in that case you are arguing that inflexible gold money supply should be at the centre of the monetary core.

In each of these cases the hierarchy of money framework helps us frame the discussion so that, while we might differ in opinion, at least we are talking about the same thing.

Next, let’s move out one layer, to the monetary periphery.

If you want to know more about how exactly private banks create money, check out my video on this subject which I have linked in the top right corner of the screen.

And if you already seen it, or are already familiar with this discussion, you might now see how using the Hierarchy of Money, this discussion can firmly be placed in the region of the monetary periphery.

Another example, is a very strict gold standard regime, where there is no central bank at all. This is something that a lot of YouTube videos are advocating for, especially in the United States. They long back for a time in which there was no central bank. In that time, the monetary core consisted purely of gold and silver. A core that is relatively inflexible. However, this does not mean that the money supply is completely inflexible, since the monetary periphery is still very flexible. It still created a lot of money in the days before central banks… and subsequently there were a lot of bank crises when the periphery became too big relative to the core and the system collapsed.

Okay, now let’s move on to the final layer in the monetary system: the financial crust.

The financial crust consists of all financial instruments that are not bank money. While these might be accepted as payments in some places of the economy. They are not generally accepted.

That is why I don’t consider these instruments to be part of the monetary core or periphery.

However, because instruments in the financial crust are still used as payment in many parts of the economy and because it is often even bigger than the bank money layer, understanding this layer is still essential for any monetary economist.

Also, since the money market fund can invest my bank money elsewhere, from an economic perspective something that looks a lot like money has just been created.

However, since I couldn’t use it to buy groceries, money market fund accounts are in the financial crust rather than in the monetary periphery.

Another example of instruments in the financial crust are those coins that you use to buy drinks at a festival. When you buy these coins at the start of a festival, it could be argued that new money was just created. After all, your bank money has just been transferred to the organisers of the festival.

At the same time, you now have some plastic coins that from your perspective can be used as money, to buy drinks and food. As the music keeps playing these plastic coins are just as, if not more valuable than money in your bank account.

However, since this money is not universally accepted, I consider it part of the financial crust.

So, whenever I meet a monetary economist that tells me: “everyone can create money, the problem is just to get it accepted.” I now know that they are talking about the fact that anyone can expand the financial crust, but that the problem is to move your money up the hierarchy. Potentially even into the monetary periphery or core. This is for example what Facebook was trying to do when they announced their Libra coin or what was envisioned by the creators of Bitcoin.

So, that was the hierarchy of money visualised, the framework that I use that make discussions about monetary matters less confusing.

I hope it will do the same for you.

If you have not done so already, I invite you to check out some of my previous posts on money printing, private bank money, and monetary policy and try to place them using the hierarchy of money.

From now on, I will use this visualisation in future posts and videos about the role of gold in the monetary system, the difference between quantitative easing and money printing and many more.

If there is a specific subject you would like me to explore and place it in the hierarchy of money let me know in the comments down below.