In theory, economists like to look at data, at the facts if you will. Well, one fact that they have been puzzling over for quite some time now is why asset prices, such as house prices and bank credit creation tend to move up together.. Until, of course they don’t and they both come crashing back down.

This phenomena is known as the (domestic) financial cycle and it looks like this.

Now the reason that economists found this phenomenon puzzling is that they have been trained to think from the perspective of a rational individual. Why would people come to believe that house prices can only go up? And why would banks, which employ some of the smartest people, be stupid enough to fund a housing bubble? That’s what we will explore in this post.

So what is the financial cycle? Well, here I will refer to two quotes of the European Central Bank:

The financial cycle can be thought of as economic fluctuations that are amplified by – or stem directly from – the financial system.

They also say that

It typically manifests itself as a co-movement between credit aggregates and asset prices with a possible impact on real economic developments as well.

Okay, let’s look at an example first before dissecting these quotes.

The biggest and most recent episode of a financial cycle happened in the United States and it started … right around 1996. In this year both the level of debt compared to the size of the economy (also known as credit to GDP) and inflation adjusted house prices started to pick up. And up and up they went. And as they went up… the people were happy, the sky seemed the limit. If you want to get rich, just buy a house.

And the banks? They were more than willing to lend. After all, if a borrower could not repay the loan, he or she could sell the house. Since the price could only go up, the house sale would always yield enough money to repay the loan….

Now at the same time, it so happened that the economy was doing really well. Even a big stock market crash in 2001 could not stop the party. After that stock prices also started to pick up until….. in 2006 house prices started dropping. Then in 2007 stock prices followed, and in 2008 everything came crashing down and the world faced its biggest banking crisis in a hundred years

and that was.. in a nutshell… the financial cycle.

Now as you might have seen, there are two elements to this story.

Now, as I mentioned in my post on the Bitcoin bubble, bubbles in asset markets can happen without bank credit. This is primarily because asset markets are susceptible to positive feedback loops.

Economists are not used to markets with positive feedback loops. After all, a normal market, such as one for, let’s say, fish has a negative feedback loop. This means that, if more people want to buy meat… the price will go up and this will mean that people will want to buy less meat… After all, at some point meat just gets so damn expensive that it makes you want to become a vegetarian.

Asset markets do not have this crucial feature. For example, in the Bitcoin market, if lots of people buy Bitcoin, its price will go up… and this means that all people who bought Bitcoin originally will profit. This will attract more people into the bitcoin market, and subsequently push up the price of Bitcoin up even further. … until it can go no further… and then, the process will reverse. Despite the holdouts from [HODLers](https://en.wikipedia.org/wiki/Hodl#:~:text=Hodl%20(%2F%CB%88h%C9%92d,is%20known%20as%20a%20Hodler.) … most people will get rid of their Bitcoins if they see it is crashing and this will in turn motivate more people to dump it.

Notice how this behaviour can be perfectly rational at the level of the individual investor. A smart investor should notice an asset bubble forming. But rather than staying out if, the investor should buy when the price is low and sell when it is at the top. Sure, many investors that participate in asset bubbles believe the price can only go up, which is not rational in any way. But, thanks to the positive feedback loop, smart and rational investors should participate too. They just need to make sure they get out when the bubble pops. So, asset markets are perfectly capable of bubbling on their own. In fact this happened during the first Bitcoin bubble, there were hardly any banks involved there. But, think about this for a second, this bubble did not crash the economy. In fact, it hardly left a dent.

This is not surprising since it was tiny compared to the U.S. housing bubble of 2006. But, how could that bubble get so much bigger? This is where the banks come in.

If you are familiar with my post on bank lending you will know that banks create money if they make loans. Now, this money creation is not a free lunch for a bank. A bank will still go broke if people do not pay back these loans.

So, it makes sense that banks are often pretty conservative when it comes to lending. If they make a loan to you … they will want to have some collateral. This means that… if you cannot pay back your loan… banks will get the asset that you pledged, as collateral. In the case of a mortgage, this would be your house. So, for the longest time, bankers and also economists considered mortgages the safest types of loans. After all, if a customer goes broke, the bank can always sell the house, and since house prices only go up…… This behaviour is clearly irrational from the perspective of the banking industry. But, again a major problem is that this behaviour is rational from the perspective of an individual bank. After all, housing bubbles can go on for multiple years. And, in those years banks that create lots of new mortgages will hit their yearly profit targets while their quote on quote “rational” competitors do not hit their yearly targets.

In this case, if banks expand their balance sheet to fund a new house purchase, they create new money and credit at the same time. This new money will initially go into the housing market. And with new money and demand coming in… but not many new houses being build, the price of houses will inevitably go up. So increased bank lending means that asset prices go up.

And if asset prices go up… bank loans will … for a time, really, become safer. And house prices will… for a time… actually become a great investment. This time that I am referring to is indeed the upswing of the financial cycle. And the crash that will follow ushers in the downswing.

Now, the financial cycle is not just important to those who participate in it. It is important to all of us because it affects the economy. During the upswing, the economy will get a boost from all people increasing spending because they think they are getting rich of their house. However, during the downswing, we are all royally … unlucky.. because people will stop spending to repay their mortgage and even worse …. Our banking system will implode and our industries will starve of credit and our thrifty savers will despair as their bank goes belly up.

This will inevitably affect the economy because people will start spending less when they need to repay their loans. In other words they need to restore their balance sheets. Therefore, this type of recession is known in economics as a ‘balance sheet recession.’ What to do about it.

Now, you will surely say… that is bad. This should be stopped.

Today, it is hard to imagine that before the great financial crisis of 2008, financial stability was only an afterthought for most central bankers. They were mostly concerned about inflation. In fact, with the absence of inflation, central bankers felt safe in keeping interest rates at rock bottom. They did not realise that this, of course, encouraged lending, and in turn made the financial cycle stronger.

Of course, after 2008 central bankers could no longer ignore the financial cycle. In fact, central bank economists came up with a lot of new ways to tame them. The first way to do so is through stricter regulations on banks in general and risky bank loans in particular. Because they affect the macro economy, these types of policies are known as macroprudential policies in technical jargon.

The second way is through increasing interest rates during the upswing and decreasing them during the downswing. This, in central banking jargon, is known as a monetary policy response.

But, that is theory. Practice … is another story.

While central banks have lowered interest rates after the crisis, they have not increased them by much when asset markets where booming but inflation was still low in fear of ruining the economic recovery. 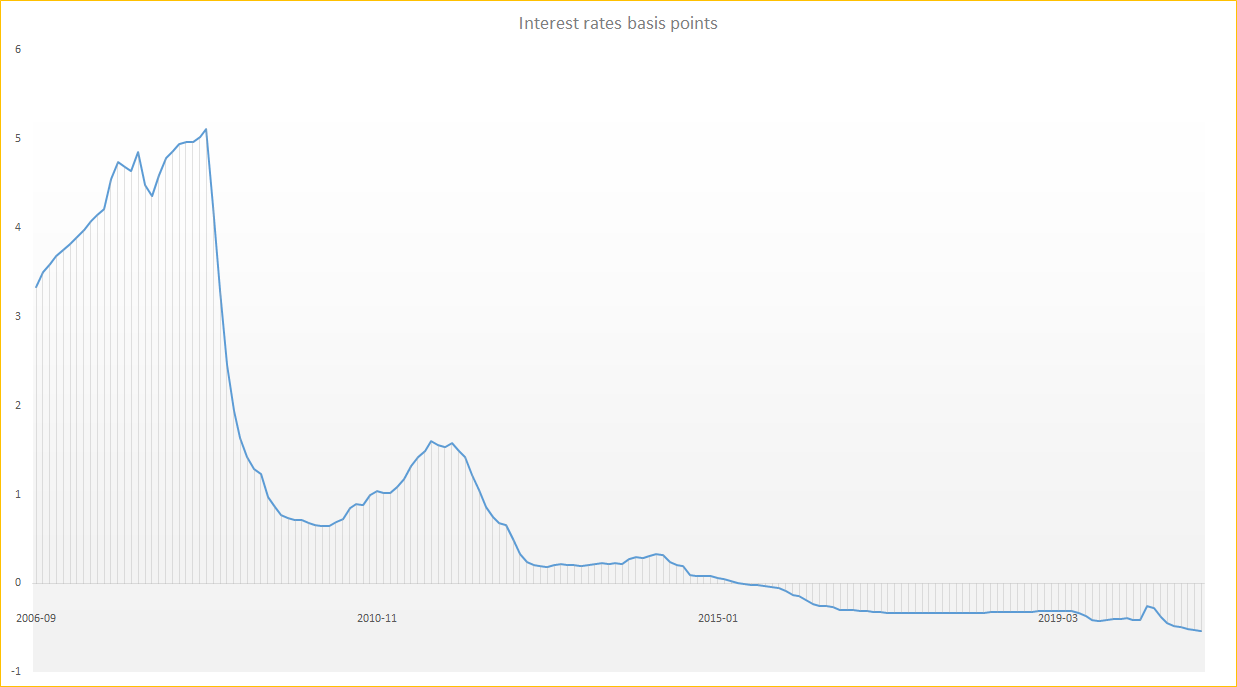 Also, many governments, especially in Europe, initially decreased their spending after the 2008 recession, making it worse. Only when it comes to bank regulations have things improved … Banks are much more heavily regulated than they were before. That’s probably why, up to now, we have not seen a renewed bank crisis as a result of the pandemic. Also, some of the latest bubbles, seem to be less powered by local banks but more by international capital flows and indeed central banks themselves. But, this is a subject for future posts.

So, let’s wrap up. The financial cycle refers to a co-movement between asset prices and bank lending. While asset bubbles can definitely emerge themselves, thanks to positive feedback loops that are inherent to these markets, when the banks join in … you better hide because that’s when they can get truly dangerous.